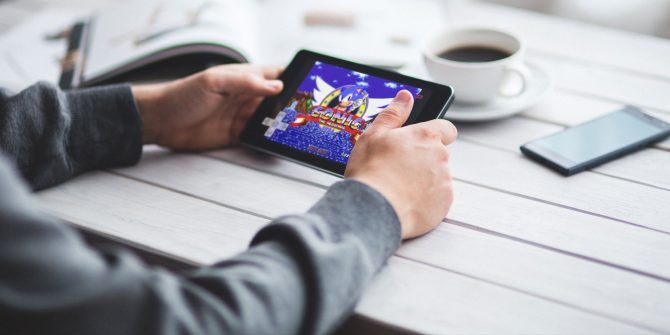 Retro gaming is gaining in popularity. Old games from your childhood are all the rage, with titles as diverse as Frogger, Double Dragon, Doom, and Star Fox 64 enjoying a revival.

Just because your old consoles have been trashed doesn’t mean you can’t play those old games. You just need an Android phone or tablet.

This list of retro gaming emulators for Android will let you revisit the games of your youth on a range of console and computer platforms.

How Emulators for Android Work

To use emulators, you’ll need game ROMs (and sometimes BIOS ROMs) compatible with the platform you’re emulating. However, if you don’t own the game already, downloading and using game ROMs is a breach of copyright.

ROMs should be downloaded directly to your Android device. Alternatively, you can download to your PC then copy the ROM files to Android. Retro ROMs are rarely more than a few megabytes, modest compared to today’s massive game downloads. If you want a wireless solution, use an FTP software to send games to your phone.

With the ROM downloaded, your corresponding emulator should be able to run it. But which retro game emulator for Android will you use?

The original Sony PlayStation is one of the most popular game consoles ever and the first to reach over 100 million device sales. With over 7,918 games released over its lifetime (and a few more since) there is good reason to revisit this platform.

Android users will find that ePSXe is perfect for PlayStation gaming. You’ll find a useful split screen mode for two plays and support for up to four. ePSXe originated on PC and the Android version has compatible save states, plus custom key mapping for most game controllers.

With cheat support, save states, turbo button, on-screen gamepad, and support for hardware controllers, John NESS also integrates with Dropbox. This means that you can easily copy ROM files from your cloud storage to the emulator to play them. For further gaming features, John NESS also supports screenshots, recording, and streaming.

As emulators go, DraStic DS Emulator is particularly impressive, featuring the ability to double the resolution and customize the position of the display.

Add-on controllers are supported, with the expected save states for instant save and resume anywhere game play. Save games can be synced to Google Drive, while emulation can be enhanced with a fast-forward mode.

As if all that wasn’t enough, the emulator includes a database of thousands of cheat modes for Nintendo DS games.

M64Plus is a highly rated emulator for gamers who loved Nintendo 64 games.

A variation of the Open Source Mupen64+ emulator, M64Plus features easy to use controls placed at the lower corners of the display. This lets you play games with your thumbs just like you did with the Nintendo64 game controller way back when.

Playing with the software controller is preferable to relying on a hardware game controller. USB or Bluetooth Nintendo 64 controllers are hard to come by. As such, comfortable gameplay is only achievable on an Android device that isn’t too big for your hands. It’s more suited to phones than tablets.

For fans of the Game Boy and Game Boy Color, this dual-system emulator is compatible with a wide range of Android devices.

It’s full of features, too, from save states and video filters to cheat codes, external controller support, and custom palettes. My Old Boy! even includes Game Boy Camera and Game Boy Printer emulation.

So, if you fancy revisiting the library of 1046 Game Boy and 575+ Game Boy Color games, install My Old Boy!

From the same developer as My Old Boy!, this emulator again is available for a wide selection of Android devices. This makes it suitable for old and newer hardware.

While no game ROMs are included, My Boy! features BIOS emulation, so no system ROMs are required.

Recall the days of pulling up a chair to your PC and typing cd to swap to the game directory? Entering a single command to launch the game without a desktop GUI?

If so, revisit the classic PC gaming era of MS-DOS on your mobile with Magic DOSBox. Thousands of games were released on PC before Windows 98 was able to support desktop game launching. Many classic PC gaming titles have been declared abandonware or made open source. Over 2,500 games can be found on the Internet Archive.

Most PC games from this era are comparable with Amiga and Atari titles. Along with common platformers you’ll notice a greater number of simulators and god games.

The PlayStation Portable (PSP) was an incredibly popular portable gaming system when it first came out in 2004. With over 1,370 games released between launch and its 2014 retirement, PSP fans have an incredible choice of titles, all in HD.

The PPSSPP emulator will take you back to 2004. Loading ROMs is straightforward, and the app is configurable with a wide selection of settings. HD resolution is supported, saves can be transferred from a physical PSP, and the anisotropic filtering and texture scaling settings can be tweaked.

If you’re a PSP fan, this is definitely the emulator to install on your Android.

If you enjoyed gaming on the Sega Genesis (Sega Mega Drive internationally) then the GENPlusDroid emulator is for you. A key player in the so-called console wars of the late 80s and 90s between Sega and Nintendo, over 900 games are available.

GENPlusDroid supports physical controllers, has rewind, forward, and cheat support, auto save, custom key mapping, and many more features. Ultimately you can enjoy a near-authentic Sega Genesis experience on your Android device with GENPlusDroid.

Perhaps the most popular computer system of the 16-bit era, the Amiga was launched in 1985 with the final version, the CD32, manufactured until 1996. In that time, an estimated 4,850,000 Amigas were sold, with over 2000 games released while it was in production.

Amiga games can run on current platforms with the help of various UAE-based (or inspired) emulators. Uae4arm is perhaps the best option on Android, capable of running in any of the Amiga line configurations. So, you can emulate an Amiga 500, a 4000T, or a CD32. The Amiga’s library of games don’t all run on the same device; there are three basic generations of system, hence Uae4arm’s granular configuration tools.

While a generic Amiga Kickstart file is available with most emulators, for complete support you should buy the official version. This is available from Amiga Forever Essentials.

The most popular home computer of the 1980s, the Commodore 64 is currently enjoying a resurgence as a retro gaming clone system. If you don’t care for the breadbin aesthetic as much as the games, however, you can run them on Android.

Several emulators for the C64 are available on Android, but of them Mobile C64 seems to be the most stable. Including a software keyboard for text entry and support for USB and Bluetooth controllers, Mobile 64 also ships with some public domain games to get you started.

In the UK and Europe, the Sinclair ZX Spectrum was a popular, if modest, home computer system. Incredibly affordable, it sold over 5 million units, a figure that doesn’t include clones such as the Timex Sinclair 2068.

Speccy is a remarkably complete emulator. It offers support for all Sinclair ZX Spectrum models and most clones. Speccy also supports game snapshots, loading from tape files (with authentic tape loading effect), and you can play use USB and Bluetooth controllers for games.

That’s just scratching the surface. If you loved Spectrum games, this is the best emulator on Android for you.

Many other emulators are available for Android. But if you’re installing more than a couple of emulators, it might be smarter to stick to one solution.

Retro Games on Your Android Device

We think these are the best game emulators for Android, but whether you agree or not, you should find them simple to install, set up, and play.

Simply copy the ROM files to your Android device, load them up in the appropriate emulator, and start playing.

Android is a great option for playing classic games, capable of handling most emulated platforms. In fact, you might even use Android to create a retro gaming hub.

How to Turn an Android Device Into a Retro Gaming Console

Love retro gaming? Here’s how to easily turn any Android phone into a retro game console and enjoy your favorite classic titles.

Deputy Editor for Security, Linux, DIY, Programming, and Tech Explained. He also produces The Really Useful Podcast and has extensive experience in desktop and software support.

Please confirm your email address in the email we just sent you.